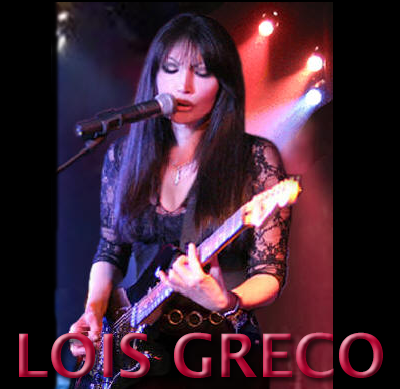 Music has always been a way of life for Lois Greco. This gifted blues artist has a powerful, soulful voice and plays smokin’ lead guitar. In addition to performing with her band, Lois has been involved in film and television with acting roles on “Days of Our Lives”, “General Hospital” and a number of episodic series. She began writing and singing for feature films, TV and radio. A number of her films are currently running on HBO, Cinemax, Showtime & USA. While in Los Angeles she worked closely with actor Martin Landau who directed her in the lead role of the rock musical "Reach for the Stars" in which she wrote a number of songs. She spent many hours in the studio providing the speaking and singing voices for a number of Hanna Barbera cartoons as well as commercials for radio and TV. She and her brother, Earl Greco, have always worked together musically. While they were living and performing in Los Angeles, he became very well-known internationally for his advanced bass technique which was recorded on the “Star Licks Video Series”. He is a creative musician who has the ability to combine unbelievable technique with incredible sensitivity. Lois built a recording studio in her home in RI in order to be closer to her family and continue to record for film and television projects in Los Angeles and in New England. She was the recipient of the "Most Outstanding Female Singer" Award in the 6th Annual "Blues Audience" Readers Poll. She is currently performing throughout the US and is planning a European tour. She just released her new CD titled, Takin' Hold Of Your Heart". Her current band members are her brother, Earl Greco on bass, Glenn Trojnar on drums, Jody Briggs on keys & Hammond. Although her music is very bluesy, she likes to draw from her other influences of R&B, Gospel, Funk & Rock.  www.loisgreco.com