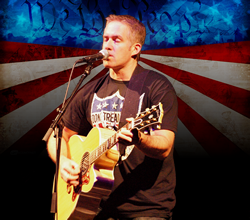 Singer/songwriter Chris Ross has an outstanding lineup of stellar musicians backing him up including renowned guitarist Dave Brunyak, formerly of the popular "jamband" Humblebee and currently of The Phreaks (Phish tribute), acclaimed drummer Alec Antobenedetto of the premier Allman Brothers tribute band The Peacheaters, and bassist Kevin Neslon. Chris's music has unique sound that's a combination of modern acoustic pop with classic 70's acoustic rock. If you like Jordan Page, Crosby Still & Nash, and Edwin McCain, you'll LOVE Chris Ross!  With compassion-filled lyrics and catchy melodies combined with commanding and powerful 4-part harmonies and intricate guitarwork, Chris Ross 's music grabs the listener's attention. Chris has a loyal following and performs both locally at fine restaurants and bars and at large venues such as Showcase Live at Patriot Place in Foxboro where he has performed numerous times.  He has recently released two CDs titled "The Story of Freedom" and "I Believe" which are receiving rave reviews and national attention.  His song, "Freedom" was nominated for "Best Single" in WMRC's 2013 Local Music Awards, he won "Best Original Act" at the 2014 WMRC Local Music Awards, and he was named "Musician of the Month" by Liberty Bell Radio.  When you catch the Chris Ross Band live, you'll soon realize what New England's been buzzing about.
Like us on Facebook and follow us on Twitter: